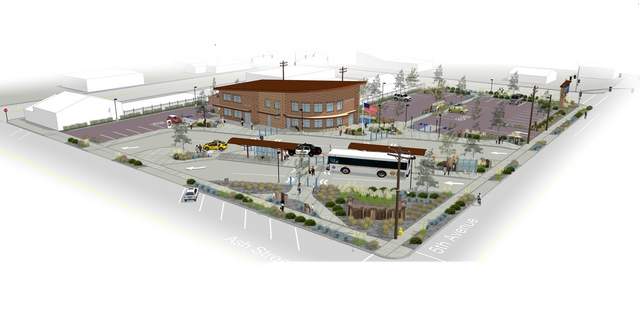 EPHRATA — The Grant County Transit Authority will return to its roots for its 20th anniversary celebration from 1 to 4 p.m. Saturday at the Ephrata Amtrak station, 90 Northwest Alder St.

“The Amtrak station was where we started,” said JoBeth Carlson, dispatch support, marketing and public relations for the transit authority. The first transit authority buses started serving customers Nov. 5, 1996. “November 5 is our 20th anniversary. We will have been on the streets 20 years as of that day,” Carlson said.

The Amtrak station is still the main transit point for riders north and south from Quincy and Ephrata, she said.

Along with pictures and stories from the past and a cake to commemorate 20 years, the birthday party will include a look at some projects currently underway. That includes a new transfer center in Moses Lake and new bus routes to accommodate a bigger ridership, she said. An architect’s drawing of the new, $3.2 million transit center will be among the displays.

“We’re growing.” The transit authority has started a weekend schedule in the Moses Lake area and added bus service between Soap Lake and Ephrata. “That was kind of the first hint of what’s to come,” Carlson said.

Routes will be restructured and others added, she said. Along with expanded service, the new schedules will reduce the amount of time people must wait to transfer to a different bus line. Carlson cited the route between Ephrata and Big Bend Community College as an example.

The new “multi-modal” transfer center is currently under construction at the corner of South Division Street and West Fifth Avenue. Completion is scheduled for June 2017, Carlson said.

“Multi-modal” means “more than just Grant Transit Authority will be using (the new site),” Carlson said. The site will be available to other bus lines, including People for People, and as a taxi stop, she said.

The site includes bus loading and unloading zones, a parking lot and a two-story building, which will have a lobby where people can wait for the bus during bad weather. Bus passes will be sold there as well.

Currently the transfer point – where a bus line ends and people can transfer to a new bus line – is the shelter at the Surf ‘n Slide water Park parking lot. The new multi-modal station will replace it. The water park will still be a bus stop, Carlson said.